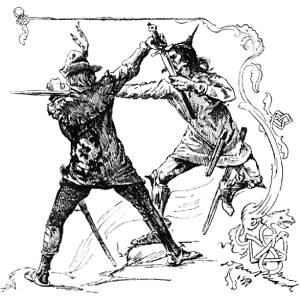 These rules first lay down the basics of melee combat, then present additional rules for unarmed combat and ranged attacks.

Attacking as an Opposed Attempt

A basic melee attack is handled as an opposed attempt to strike a target. The steps in resolving the attack are:

* Defense, Attack, Damage and Armor Adjustments are typically made for conditions such as special skills or maneuvers, active spells or magic items, etc.

The "Defender is instantly slain" option should be allowed only when the legendary hit is landed upon an enemy whose death will not derail the story or the encounter. It may be quite dramatic for a hero to instantly slay the captain of the Witch-King's guard, but for the Witch-King himself—likely the heroes' nemesis for many adventures—to be instantly killed by a single lucky roll will feel cheap and anti-climactic. Gamemasters should feel free to disallow this option at any time, or entirely.

In order to attack an opponent, a character must be able to see his target (or in the case of invisible opponents, he must at least see the space where he thinks his target is!). In other words, he must have a line of sight (LoS) to his target.

Partial LoS: If an unobstructed line can be drawn from the center of the attacker's space to any point in the target's space, the attacker has a partial line of sight, and takes a -3 Adjustment on his Attack Check. A partial LoS assumes the target has roughly 50% cover.

Unarmed attacks may be made at Reach 0 or 1. Attacks with small improvised weapons, such as a beer mug, a roll of coins, or a fist-sized rock, also have a Reach of 0 or 1. Longer improvised weapons (axe handle, chair leg) are essentially clubs, and should be treated as Mace Skill weapons of similar proportion.

To find the damage done by an unarmed blow, the attacker rolls his Brawn die and halves the result, rounding up. Small improvised weapons add 1 to the basic damage for an unarmed attack for every full 5 points of the attacker's Brawn. Thus, a hero with Brawn 9 hits in unarmed combat, so he rolls his Brawn die and gets a "7". If he's punching bare-fisted, he does 4 points of damage (7/2 = 3.5, which rounds up to 4). If he's smacking his opponent with a beer stein, he does 5 points (the base unarmed damage of 4, plus 1 for the improvised weapon, since he has more than 5 Brawn, but less than 10).

Like melee combat, ranged combat is resolved as an Opposed Attempt, with special Adjustments made to Attack Checks according to the distance between the attacker to the defender. 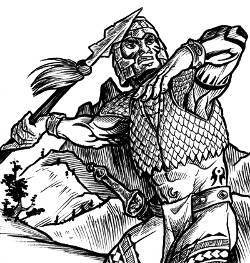 If a character meets the second Brawn Minimum, he is strong enough to reset the bow by hand, doing so with a special action, Reset crossbow, costing 1 AP. If he meets the first Brawn Minimum but not the second one, he must use a mechanical crank to pull back the bowstring before loading the next shot. For such characters, Reset crossbow costs 3 AP.

Shields are used to block or deflect blows, applying a positive Adjustment to Defense. Shields occupy the character's off hand, may not be used in conjunction with two-handed weapons, either Melee or Ranged.

Armor is worn on the body to reduce the damage sustained from incoming attacks. Non-magical armor has no effect on the attacker's chances to hit the defender—it only reduces damage.