Any task where there is a chance of meaningful failure is resolved as a challenge. The difficulty of the challenge is expressed by its descriptive challenge rank, and a number, called the challenge rating, or CR.

It is generally not necessary to roll for Trivial challenges, unless the task involves a scaling challenge, critical outcomes are possible, or the gamemaster judges the situation to be extremely tense and dramatic. In all other circumstances, you can treat an attempt at a Trivial challenge as an automatic success.

Every attempt is made using stat dice for the primary stat relevant to the nature of the challenge. For example, a challenge calling for brute force uses a hero's Brawn dice, while a challenge requiring courage uses his Nerve dice. For most tasks, there will be an applicable skill, so the attempt will use the check stat for that skill. For example, a hero tries to find food in the wilderness, either hunting small game or gathering wild vegetation; he is using the Forage skill, which is based on the Savvy stat, so he'll roll his Savvy dice in the attempt.

Success in an attempt requires a check roll, in which the hero must roll equal to or above the challenge rating on two exploding stat dice. A character with Brawn 8 attempting to lift a heavy portcullis (CR 12) would need to roll a 12 or better on 2d8!.

Certain skills, items or other circumstances may adjust the result of a check roll. Adjustments may add to or subtract from the result of the check roll, and are applied once only, after any exploding dice have been resolved.

Check rolls which produce multiple ranks of success or failure may result in critical outcomes. It is up to the gamemaster to determine when critical outcomes will be applied; some GMs will use them on every attempt made by a hero or important non-player character, but other gamemasters may prefer to reserve them for highly dramatic moments in the adventure. Whenever the gamemaster applies a critical success or failure to an attempt by a hero, that hero may earn character points due to the "learning opportunity" presented by the unusual outcome, as indicated on the table below.

When a critical outcome is indicated for an attempt by a player hero, the player should describe the nature of the success or failure, and choose a bonus or penalty from the suggestions above or suggest an alternative. Of course, the gamemaster has the authority to alter or overrule the player's suggestion according to the circumstances. For example, a hero scores a Solid Success (Rank 2) on his Disable attempt to pick the lock on the door to the Duke's bedchamber, earning a minor bonus. Since he knows there are guards that patrol the residential wing of the Duke's manor, the player suggests that the lock turns out to be nearly identical to one he's disabled in the past, so he's able to pick it in just a few seconds (half the normal time); the gamemaster feels the player's suggestion is appropriate to the circumstances, and allows it.

Alternately, if the player had suffered a Decisive Failure (Rank 2) on the same attempt, he'd take a minor penalty. The player suggests that one of his lockpicks became stuck in the lock, and he needed double the normal amount of time to free it. The gamemaster agrees that the pick became stuck in the lock, but before the hero has time to free it, he hears a guard approaching around the corner. The GM tells the hero he must choose one of three options: snap the pick off in the lock before hiding in a nearby alcove; leave the pick sticking out of the lock where it might noticed by the guard, but hiding himself in the alcove; or taking the time to free the lockpick, knowing that he'll be seen by the guard as he rounds the corner.

Critical successes and failures on combat checks are discussed in the Combat rules. 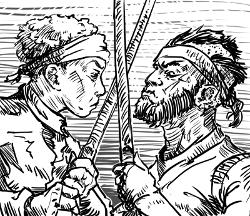 For example, the heroes have defeated all the goblins currently on the field, but they know that reinforcements will arrive any second. Briven decides to spend this lull in the battle recovering spent arrows. The gamemaster decides to handle Briven's attempt as an Easy scaling challenge (CR 6) to his Alertness skill, with each rank of success turning up three usable arrows. Briven's player rolls an 11 on his Alertness check, so Briven exceeds the task's CR by 5. With this result, he not only succeeds at the task, but achieves an extra rank of success, recovering six arrows in all.

In some cases, a successful check roll is followed by an effect roll, to determine how effective the success was. Effect rolls also use the character's stat die for the applicable skill's check stat. Depending on the circumstances, an effect roll may call for one, two, or more dice. Effect rolls are made with exploding dice, unless the rules specify otherwise.