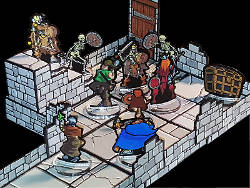 Dungeons of Olde is not just an RPG—it's also a system of printable, papercraft gaming terrain and miniatures you can use with any dungeon-delving roleplaying game. With nothing more than an inkjet printer, a package of cardstock, a hobby knife, a bottle of white glue, and an optional sheet of dollar-store foam board, you can put together enough tiles to build an entire dungeon in an evening or two. And the whole project will cost you less than the price of a pizza!

The Dungeons of Olde dungeon tile set is easy to print, easy to assemble, and easy to incorporate into your campaign, whether you play Dungeons of Olde or any other fantasy roleplaying game. Because the tile set is formatted as a .pdf file that you print yourself, you decide how many of each terrain piece you need.

The system is based on square tiles, two spaces by two spaces, for maximum flexibility in dungeon layout. The tiles are formatted to be printed at a 1.25" or 1" grid, so you can pick the size that fits your needs best. The walls of Dungeons of Olde dungeon tiles are laminated, double-thick cardstock, making them amazingly strong and allowing them to be printed on both sides. But because they're cardstock, they have effectively no thickness, assuring that they won't mess up the dungeon you've drawn on graph paper, even if you've put rooms back to back.

The Dungeons of Olde tile system also includes an innovative clip design to connect adjacent tiles, assembling them into surprisingly stable complexes of rooms and corridors. The clip concept is also incorporated into special features such as doors, alcoves, and pillars, allowing you to add detail that distinguishes one room from another. 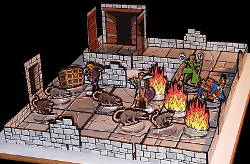 Dungeons of Olde Tile Set 0 was originally created for the enjoyment of and feedback from the papercraft game community at the Cardboard Warriors forum. Now it's available for the entire tabletop roleplaying hobby, free of charge. Enjoy!

This single-page .pdf lets you create stairs for your Dungeons of Olde terrain tile system. Simple instructions are included, so you can print, cut, fold and glue your way out of the darkest dungeon depths!

The stairs are designed to work equally well as surprisingly sturdy fold-flat pieces, or as permanently assembled 3D terrain. The "open-toed" design of the step faces allows most figures—paper, plastic or metal—to stand safely on any step, so you can really tell who's where in a pitched battle.

Thanks to David Okum of OkumArts Games

The wonderful papercraft figures shown in action on the Dungeons of Olde terrain tiles are from OkumArts' Darkfast Classic Fantasy line of printable miniatures, used here with David's kind permission. OkumArts offers several sample sets for free through the online game store, RPGNow.com, so be sure to check them out. Or visit the official OkumArts website. You'll be very glad you did!